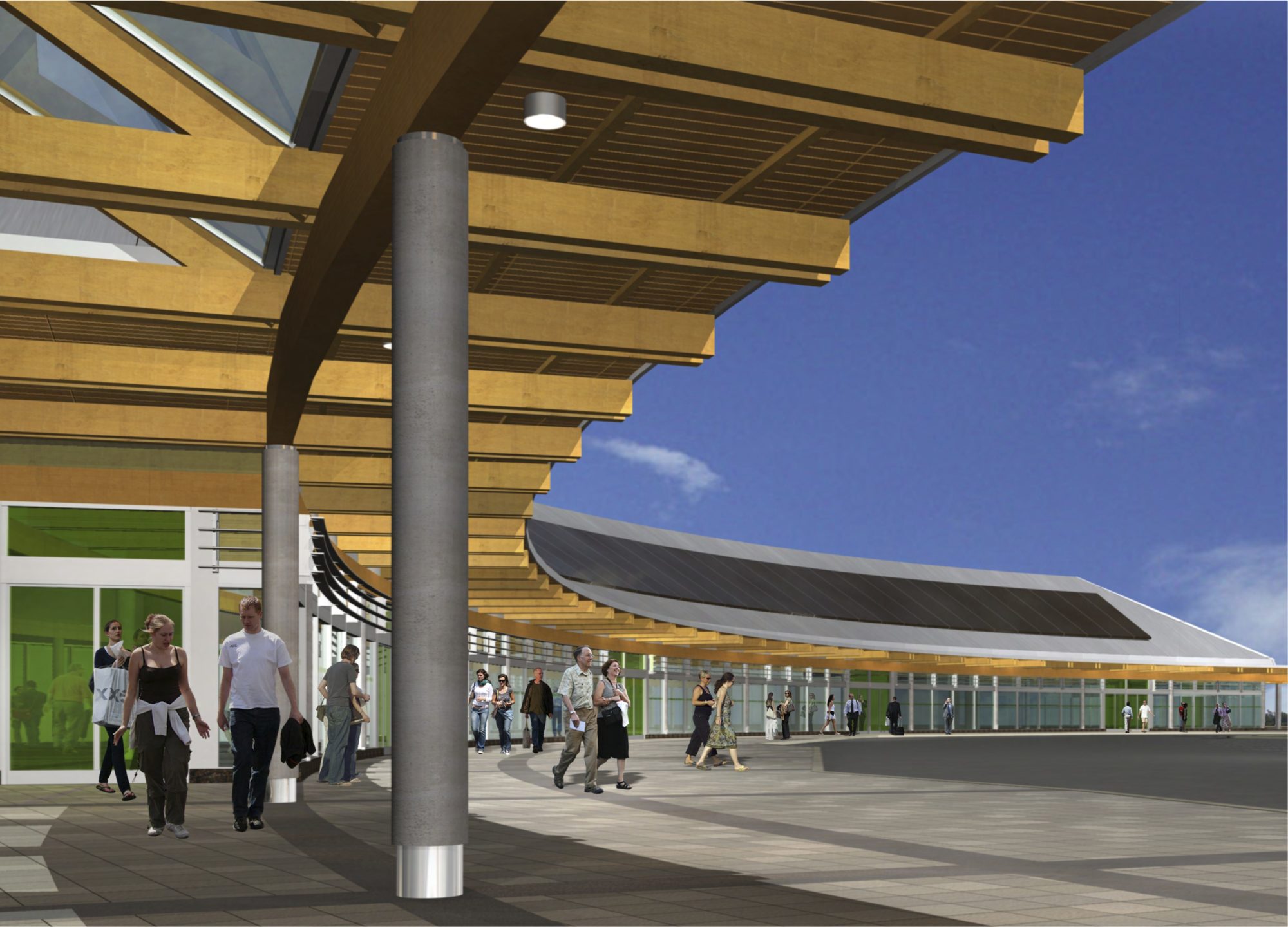 Last week, the Ontario Home Builder’s Association (OHBA) hosted an event called the “Housing Technology Tour – Suburbs on Track”. This tour focused on Transit-Oriented-Developments (TOD), with three stops across the Greater Toronto and Hamilton Area (GTHA) that are either complete, under construction, or still in the planning stages. TOD is a term used to describe developments that are built near or around areas with high level public transit, most often train stations. This results in creating a livable, sustainable, complete community where people can live, work, and play all within a short walking distance.

Throughout the next 15 years, the province of Ontario will invest more than $32 billion into building light rail transit (LRT), subways, regional transit, and rapid busways in the GTHA. With the majority of the investment happening in Toronto’s neighbouring suburbs, the outcome is to achieve complete communities within these newly built transit hubs. This opportunity to develop mixed-use projects around transit hubs has been realized by professional bodies, and the evidence has become quite visible. 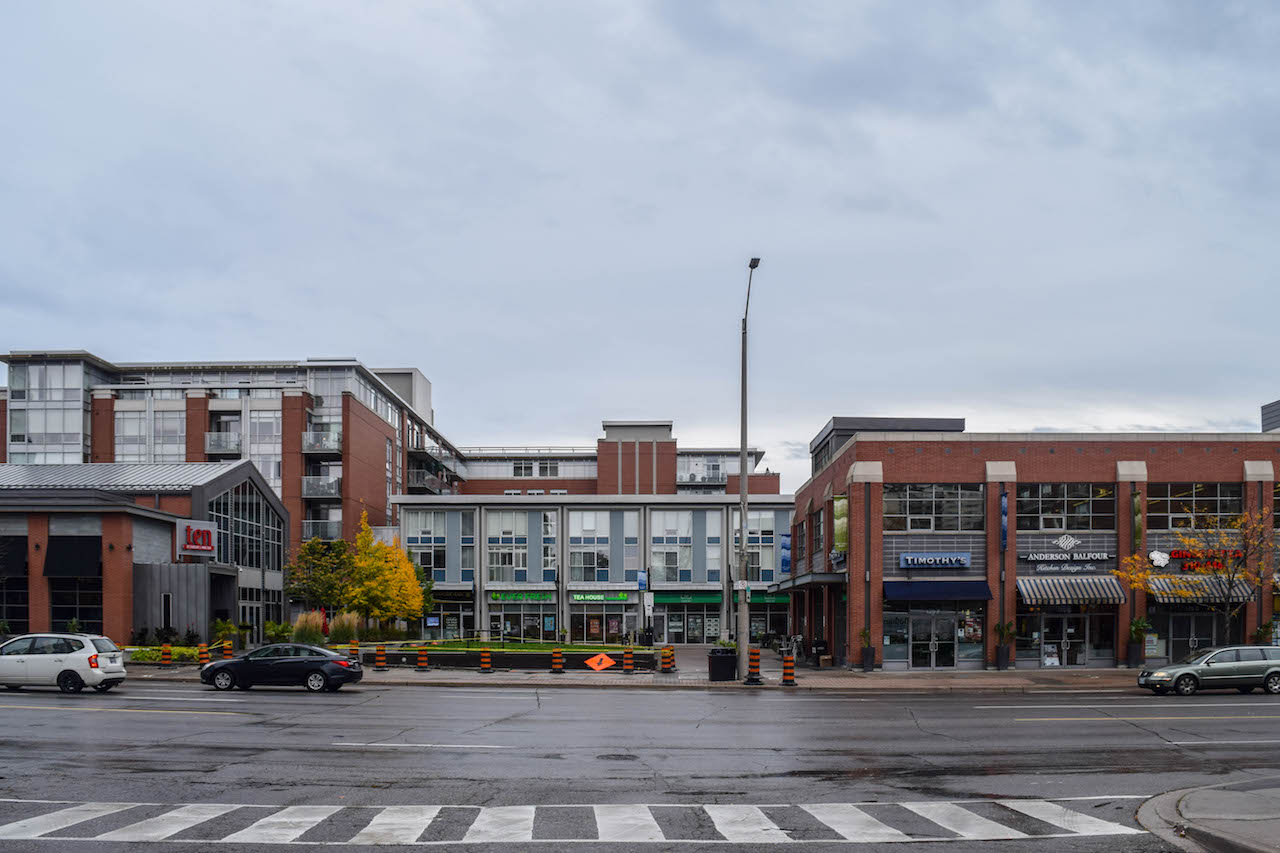 The first stop on the tour took the group of 40 to Port Credit Village in Mississauga. Known as Mississauga’s “village on the lake”, Port Credit boasts over 400 businesses, with a GO station just steps from Hurontario and Lakeshore Road. Developed by FRAM Building Group, the Port Credit Village (aka the Port Credit Redevelopment Project) located immediately south of Lakeshore at Hurontario was led by Fred Serrafero, the Vice President, Development and Construction of FRAM. Completed in 2005, the site was built on the former St. Lawrence Starch Company that was constructed in 1889, and closed operations in 1990. 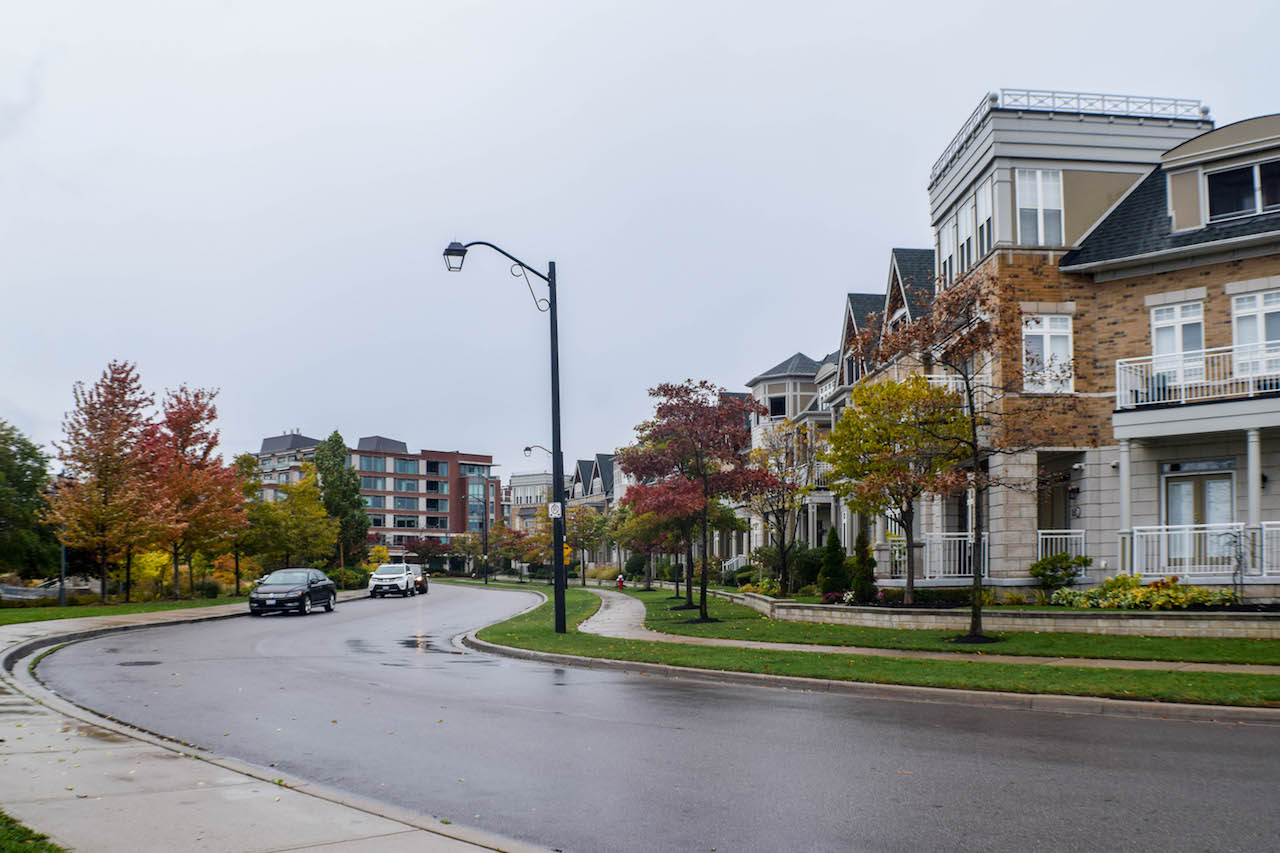 As a brownfield site, there was now an opportunity to reimagine Port Credit’s waterfront. The site was purchased in 1998 by FRAM Building Group, and required remediation before the redevelopment was complete in 2005. This mixed-use residential project consists of 410 units, split up across 225 condominium apartments, 167 street-facing townhouses, and 18 live-work townhouses. The target market for these units are empty-nesters looking to downsize into more modest houses. A public square is located along Lakeshore, with more public space dispersed throughout the meandering townhouses. Retail shops occupy the first level of townhouses along the eastern end of the site along Lakeshore, while two 2 storey retail and office buildings are found on the western edge of the site. 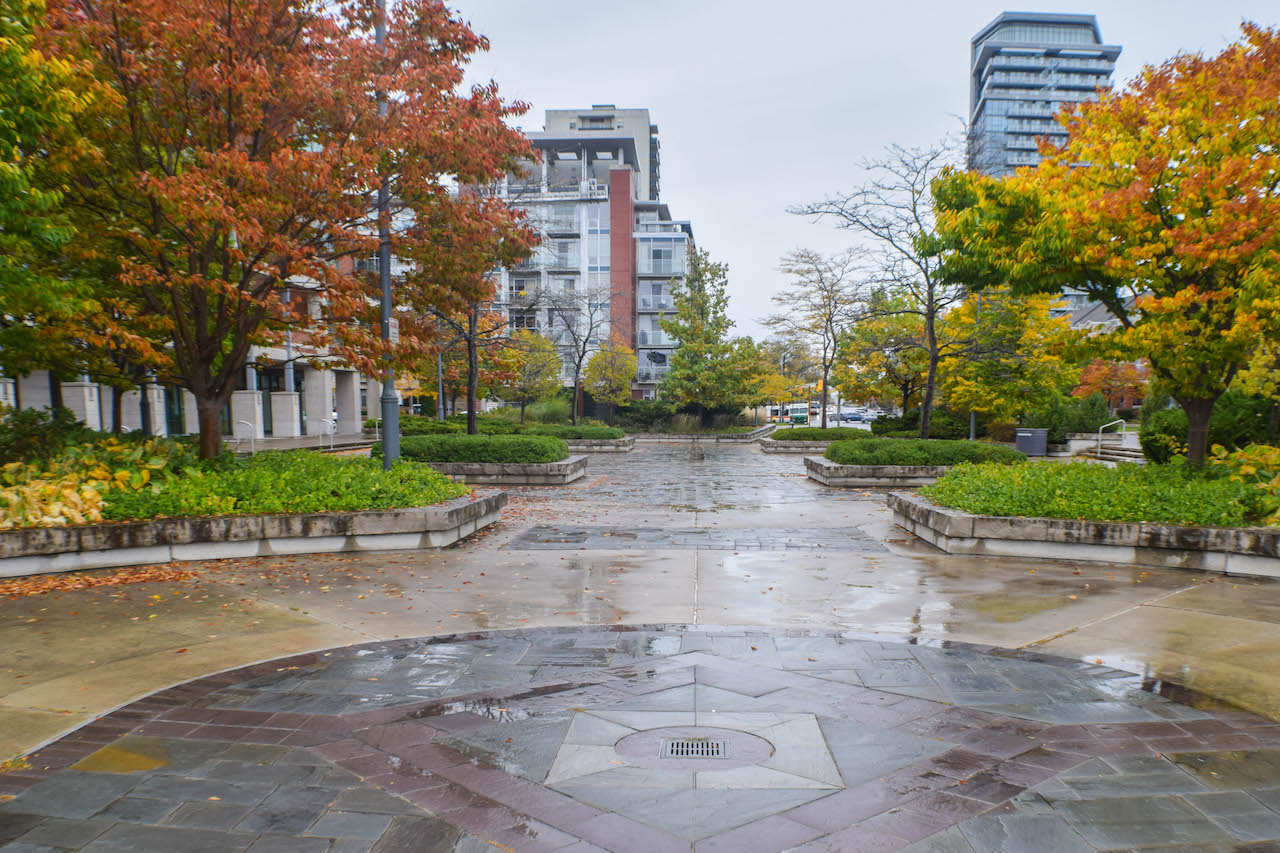 During the construction process, 50,000 tonnes of concrete was recycled from the previous Starch factory and used in the new development. As part of an agreement with the City, Section 37 contributions consisted of a redevelopment for a park, which included a 10% parkland dedication along the waterfront.

Moving along the waterfront brings the tour to Regatta condos. At Port Street and St. Lawrence Drive, Regatta overlooks the waterfront and civic square, and during the planning stages, was required by the City to include retail at-grade level along the public space. While the civic square is busy during the summer months from programming and festivals, the retail space fronting the square did not succeed. Once the warm weather disappears, there is very little pedestrian traffic one block south of Lakeshore. As a result, the retail space was converted for offices, and is now occupied by Sunlife Financial.

The tour next paused at the Port Credit GO parking lot. With the Hurontario LRT coming in the near future, intensification is slated for this station. Currently holding 265 surface parking spaces, the future of the site would see an 800 space above-grade parking structure incorporated into a mixed-use office and residential complex with two towers up to 22 storeys tall. The current station would be rebuilt at its east end to better connect with the Hurontario LRT. 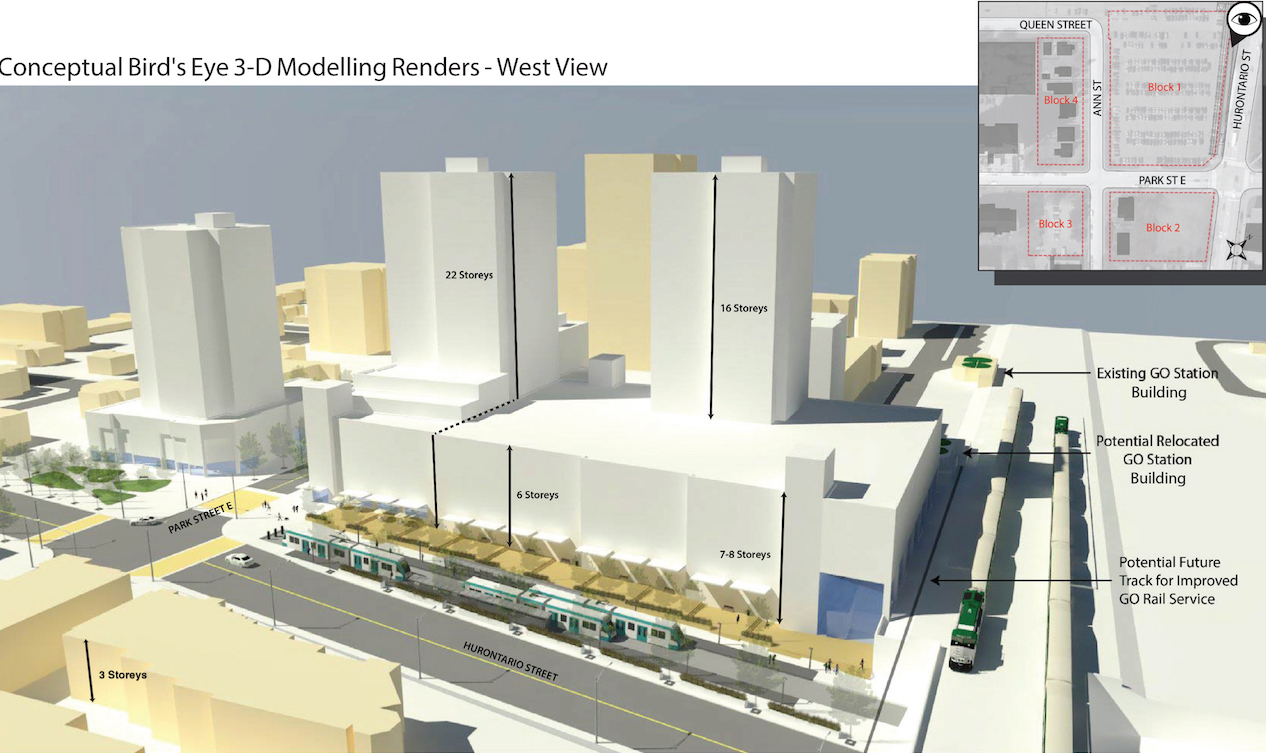 Down the Lakeshore West line, the tour arrived at Burlington GO Station. Literally steps away is Paradigm Condos, designed by Graziani+Corazza and developed by the Molinaro Group. The tour was held inside the presentation centre with president of the company Vince Molinaro, discussing how Paradigm is a project based off TOD. Molinaro posed a question to the tour group: with only 900 single family home lots left for development in Burlington, where is new development appropriate in this City? Fittingly, corridors along GO transit lines will be intensified, such as in the Paradigm case. The City realizes density and intensification are to be expected, and so Burlington is in that transition to a mature mid-sized city. Not realizing this potential would only put more pressure on the roadways, and would ignore the full potential of the transit hubs. 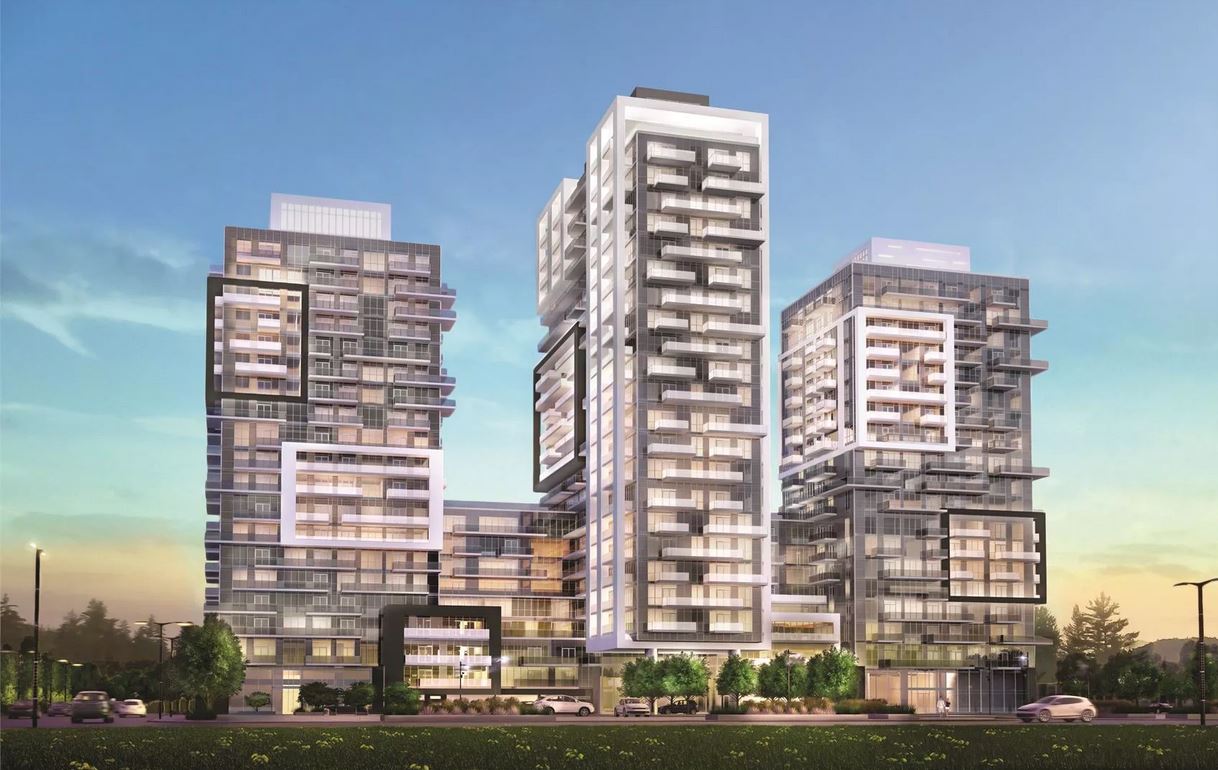 With phase one of Paradigm consisting of three towers ranging from 20 to 23 storeys over a 9 storey base, this development is currently constructing the west and central towers, with the east tower partially excavated. Phase 2 of the project will see two more 20 storey towers in L shapes along the property’s boundaries, creating a central courtyard. Additionally, phase two will include 20,000 ft² of retail and 50,000 ft² of office space. There are four levels of above ground parking provided in a garage which has a crash wall, with a 30 metre easement to the rail tracks. 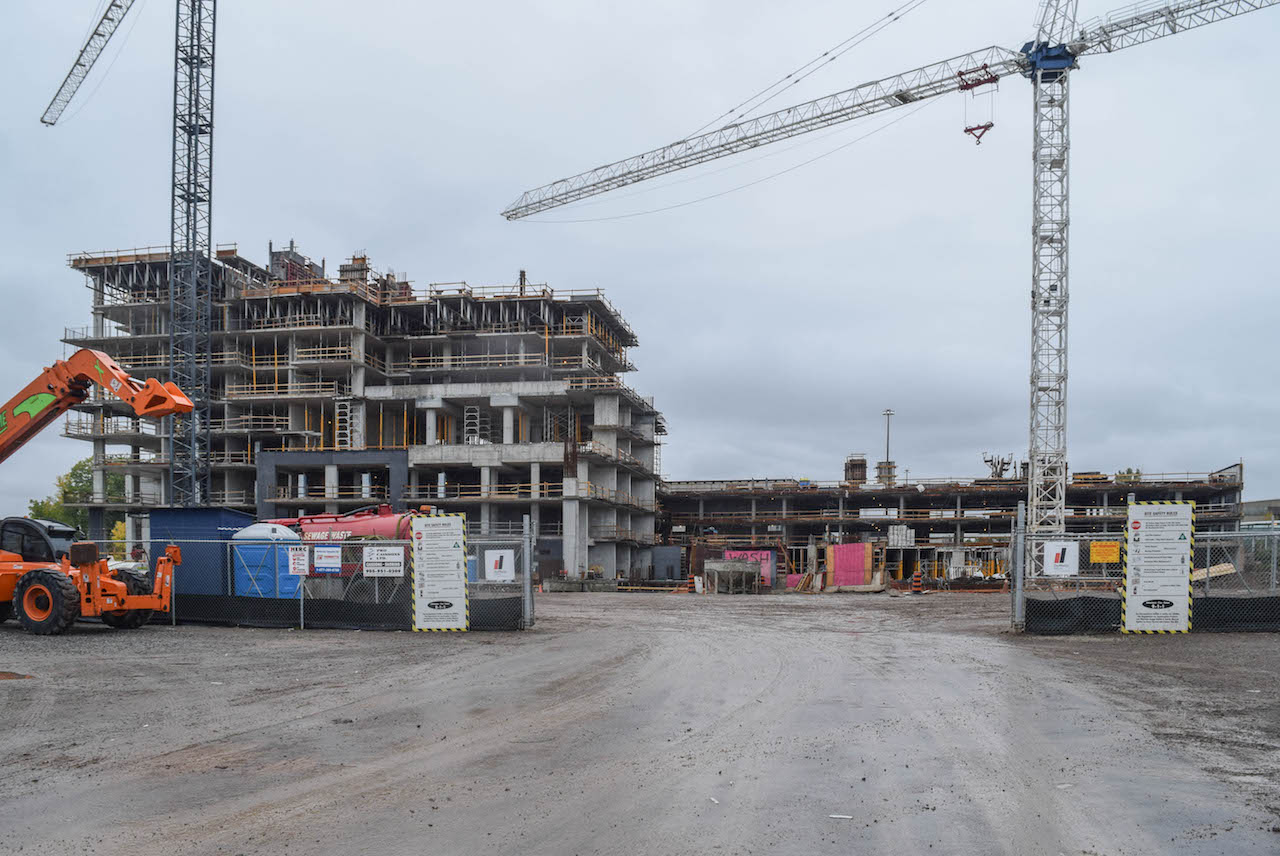 Sales have been strong since the launch, with tower 1 sold out and tower 2 now about 70% sold. Tower 3 will enter the market in the upcoming year. The units range in size from 535 to over 1,000 ft², and cost an average $500 per ft², and start from the high $200s. During the planning stages, no rezoning nor official plan amendment was needed. However, cranes had to be approved by the city so as to not disrupt any activity over the rail tracks. In addition, the City of Burlington required 100$ million in liability insurance coverage. Once complete, Paradigm will add significant density to this relatively suburban stretch of road, and provide residents with convenient access to commute into Toronto. 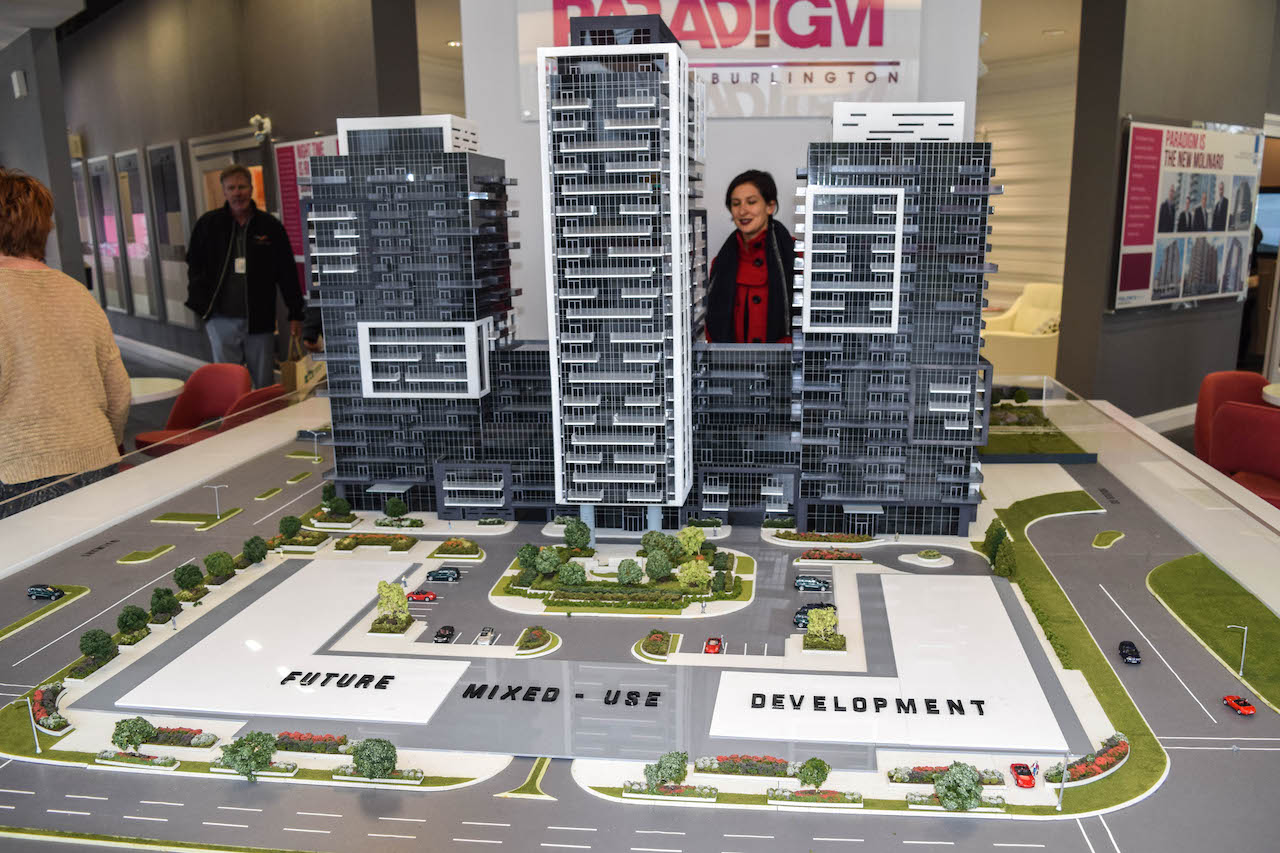 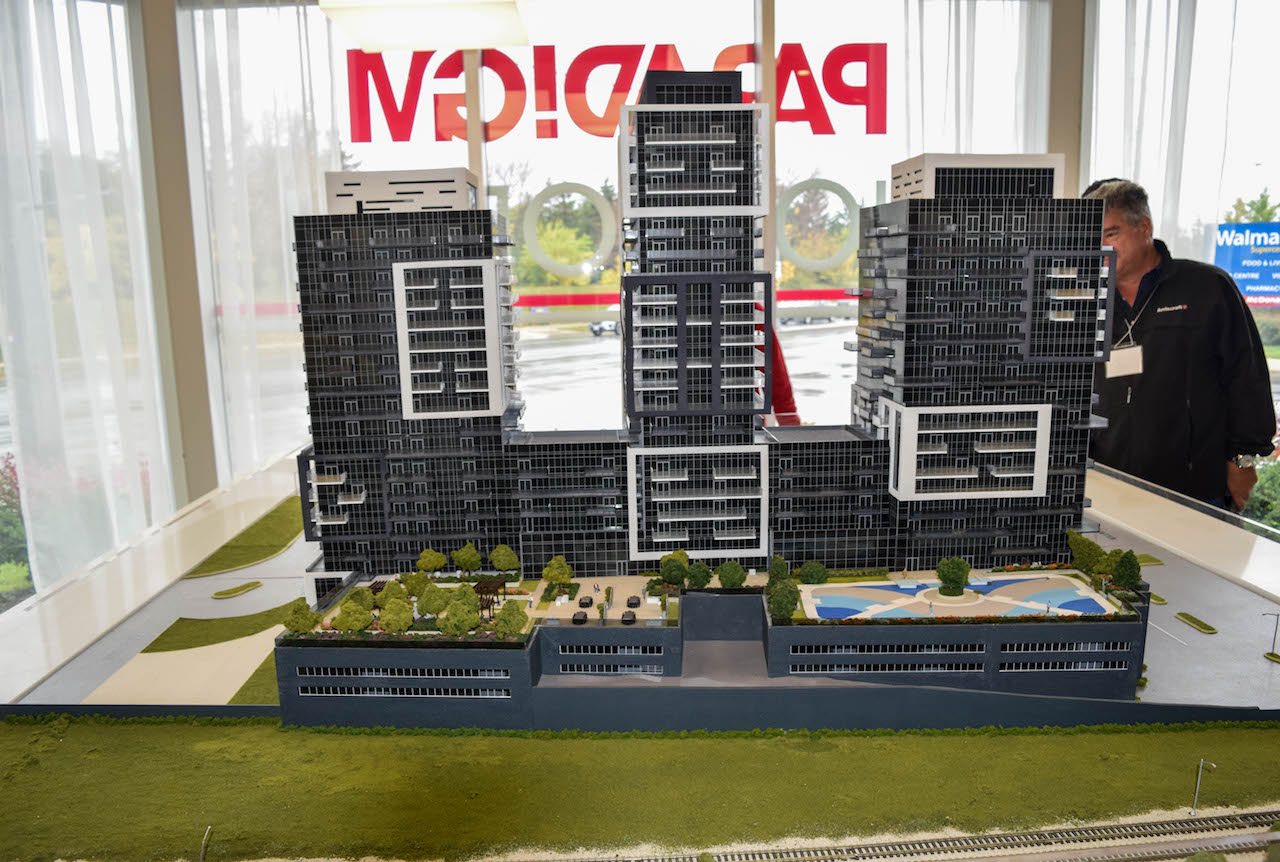 The final stop on the tour took the group to Hamilton’s West Harbour area. With no signs of slowing down, Hamilton is eyeing it as a new area of opportunity, located just 1km away from the recently completed West Harbour GO Station, and neighbouring downtown. The City is seeing investment and growth throughout the core, and will add an additional 2,000 residential units once current projects either in planning stages or construction are complete. As it stands, 13,700 people call Downtown Hamilton home, while roughly 24,000 employees work in the area. 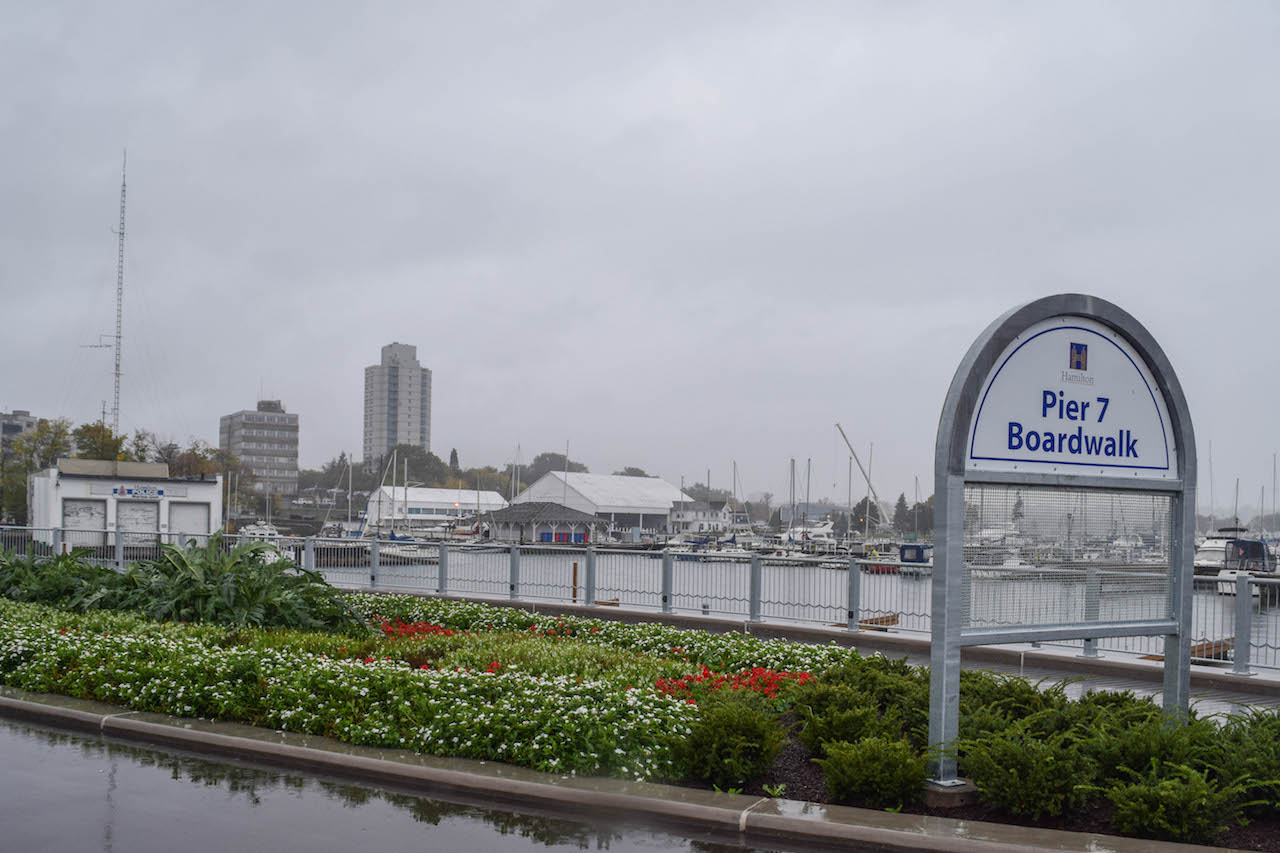 Hamilton’s West Harbour has a history of heavy industry, which had long-term negative impacts to the natural environment. Now being cleaned up, the City of Hamilton sees this land as an opportunity to reconnect the City to its waterfront, and better connect adjacent neighbourhoods, in addition to the economic investment benefits. 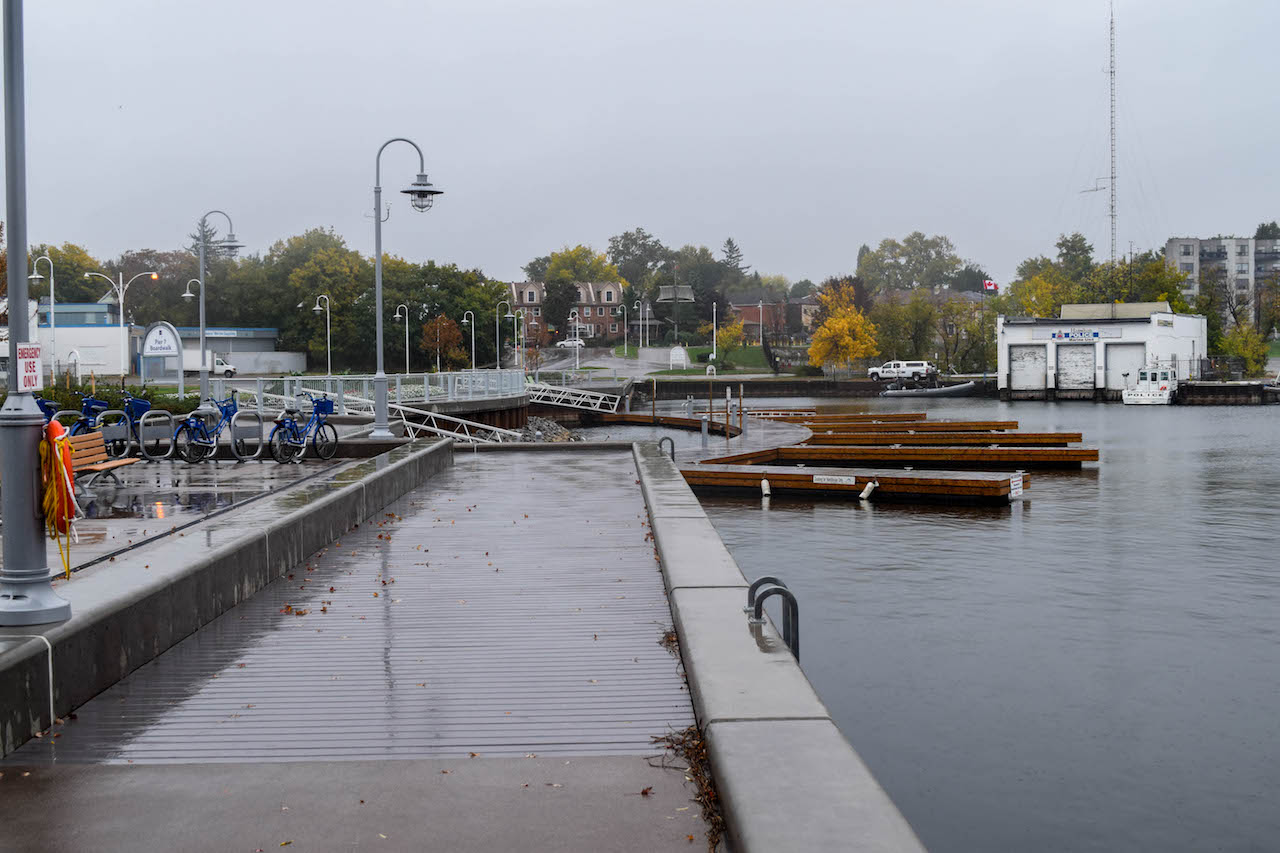 Named the West Harbour Waterfront Re-Development Plan, the site is slated for a complete transformation that would feature a new waterfront community that people will live, work, and play in. From Piers 5 through 8, the area would consist of 9 development blocks with an 8-storey height limit to buildings, with public space surrounding each of the blocks. There will be approximately 2,000 residential units, while the combined commercial space would be large enough to sustain 1,600 employees. Piers 6 and 7 will be the commercial and institutional villages, with more than 13,000 m² of space dedicated to those uses. Shops, bars, and restaurants will line the streets, providing for more activity and pedestrian foot traffic. 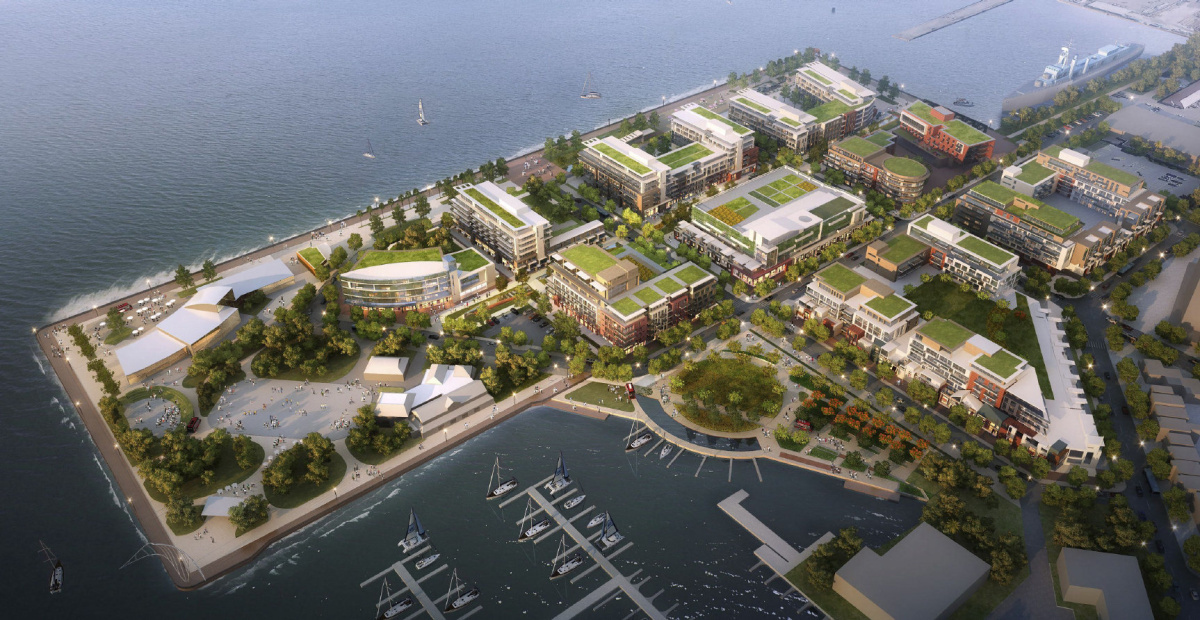 Chris Phillips, Senior Advisor in Hamilton’s Planning and Economic Development Department, stated during the tour that public space in this project is a priority for the City. Strong investments will help provide for trail networks, connectivity to the surrounding neighbourhoods, as well as an overall enhancement of the public realm . A 6-metre wide boardwalk around the perimeter of the site will provide access straight to the water’s edge. 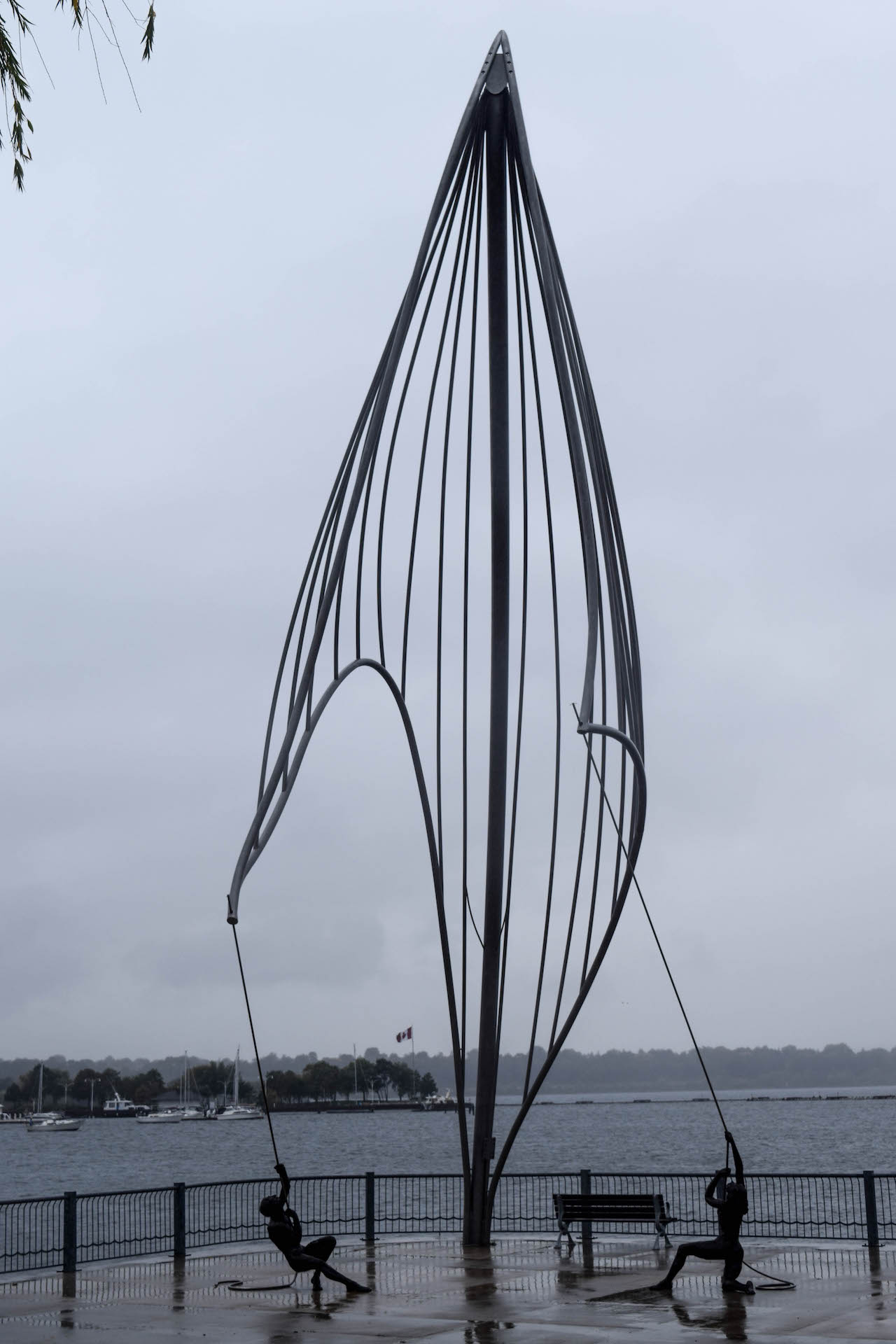 Following a rainy walk around areas of the future development, the tour came to an end. Phillips pointed out that the City is currently awaiting a developer to come forward to lead this project. After the planning process and approvals, they hope to have shovels in the ground within the relatively near future, with first occupancy ready by 2021.

As this tour showed three TODs, one completed, one under construction, and one in the early planning stages, the GTHA will surely see many more similar developments in the years to come.

*This article was written by Greg Lipinski and was published on Urban Toronto and can be found here.